YoungWoong Jaejoong, Micky Yoochun and Xiah Junsu
will be starting their individual activities.
The three TVXQ members have decided
to attend cable channel Mnet’s
‘Mnet Asian Music Awards (MAMA)’
at the Seoul Janshil Indoor Gymnasium on the 21st at 7 pm.
The three will be greeting fans 4
months after they filed the exclusive
contracts suspension request and one month after they were granted freedom to pursue individual
activities by the Courts.
Lawyer Lim Sang Hyuk, who is representing the three members, stated in a phone conversation with reporters that,
“We are aware that Mnet contacted
the three members numerous times, and after long consideration, the three members have decided to attend the event.”

Lawyer Lim stated,
“The Courts have already ruled that
‘SM must not interfere with any individual
activities that the members of TVXQ want to pursue’ so there is no problem with the three members attending the event,”
and “The decision to attend was their own choice.”
The Seoul District Courts partially
accepted the exclusive contract
suspension request submitted by
YoungWoong Jaejoong, Micky Yoochun and Xiah Junsu,
therefore the members are allowed
to pursue celebrity related, and unrelated
activities freely until the verdict of the lawsuit.
Lawyer Lim Sang Hyuk stated,
“Although our stance has become completely
different from that of the agency, we still hope
that the three members will be able to pursue
activities with U-Know Yunho and Choikang Changmin,”
and “The same hopes apply to the MAMA stage.”
However, it seems hard for all five members
to perform activities together for now.
Also, SM is currently boycotting ‘MAMA’
and it seems almost impossible for the five to perform together.
The three members of TVXQ started
their individual activities with the
first Kpop awards of the end of the year ‘MAMA’
and many are wondering what they will show us next. 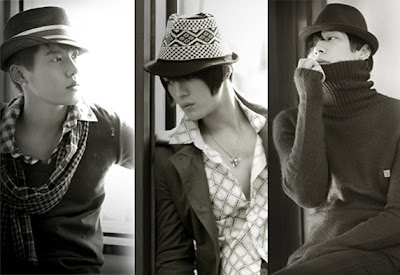 Jaejoong, Yoochun and Junsu, the three members of TVXQ / DBSK / Tohoshinki who took legal actions against SM Entertainment, have been sued for fraud in China along with Chinese subsidiary of the controversial cosmetics company CreBeau.

The plaintiff is a firm which is the distributor of CreBeau products in the Shanghai, Jiang Su and Sanxi region. A representative of the plaintiff stated:

"We were told by CreBeau that the three members were the board members of CreBeau, so we naturally believed that they will partake in promotions, which is the reason why we invested in this business. However, the three members did not appear on product announcement in Shanghai last July, resulting in fans complaining to us and returning the products. The overall loss that we suffered amount up to 1 million Yuan ($150,000). Yoochun and Junsu apologized to us regarding the matter but this fraud left us with too much damage, so we sent CreBeau a notice on October 22nd telling them to pay for the damage caused by their misrepresentation. However, we did not receive an answer and CreBeau closed their office in Beijing, so we had no choice but to sue them."


To this claim, CreBeau answered:

"We are analyzing this matter right now but it appears that they are making unreasonable claims. We have warned them about overly promoting the involvement of TVXQ members and it appears that they are suing them because we have stopped our ties with them due to various reasons. They say that we closed our office but in fact it just moved to another district of Beijing. Other distributors are doing fine in China."

I dont really understand... Why do everyone want to "shoot" TVXQ...?? 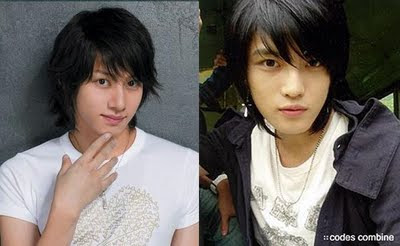 The most important factor for Korean boy bands to increase their popularity rapidly in China is that every single member of the group is handsome and charming.
We can tell by all the popular Korean boy groups
in China that every one
of them are pretty boys, not losing to
any of the pretty girls on the street.
Of course before a group’s debut,
the agency company would normally arrange
the most charming member within the
group to attract the public’s attention.
The beauty of Kim JaeJoong from Dong Bang Shin Ki is
unquestionable and the beauty of
Kim HeeChul who is from the same agency
company group Super Junior is also well-known for his pretty face.
Dong Bang Shin Ki’s Kim
JaeJoong Nickname: Flower Flower (花花 = Hua Hua)
The first time you see him you’ll be visually
shocked, and the effect stays the same for the second and forth.
This is Kim JaeJoong,
his beauty if cold yet irresistible and
his coldness normally makes one feel
unreachable; but once you get to know
him you will get to see his warm hearted personality.
He reached the height for his popularity
based on his talent with his heavenly
vocals and charming looks.
Maybe JaeJoong was born as a beauty
for the sake of the performing stage.
“Everyone might think I’m very confident
with my own look because I had won
the best-faced award, but that’s not true.
If I’m asked to choose the past of me that
I’m most confident of then it’ll
have to be my eyebrows, and
I have no confidence for the others.
Talking about my
road as a single, I was tone deaf way
back during my high school time, and at
that point of time I was really upset because
I was said that I’m bad at singing, but this
is the start of my success and as time goes by
I started to enjoy singing and found the beauty of it!”
JaeJoong who was still tone deaf till
ages 14 had worked hard for his
dream with determination, and from
a tone deaf to an angel who sings heavenly,
together with Cassiopeia he had grown up realizing his dream.
Super Junior’s Kim HeeChulNickname:
Cinderella, Princess of Mars
The beauty of Kim HeeChul is coquettish,
he’s gentle like women and yet has
the determination of a man, and
therefore he has the ablity to attract both men and women.
The first time seeing him is in the music video of ‘Twins’,
a red headed person with big
round eyes is enough to make one dumbstruck.
“This kid is really pretty!”
many people had said, but as time goes
by it’s his personality, smart and his
ability to eloquent well that attracts others attention.
From a certain point of view it can be said
that the success of Super Junior is mainly
because of Kim HeeChul and this is because he uses his
ability to attract attention by his charming
characteristic and soon put the focus
onto the huge group of 13 members.The beauty of
Kim HeeChul had caused him to be a
little obsessed with himself, but those
people who are obsessed with themselves are usually adorable.
On the popular Korean variety show ‘Star Golden Bell’,
when ‘Princess’ was asking what the
secret of his popularity was he said,
“One’s look plays a big part to it,
but there are many other points to it too, therefore
don’t judge just on my looks only.”
Kim HeeChul is one of the precious few
in Korea who are excelled in all areas, he can sing, dance, host,
act and compose too. Especially the SBS
drama ‘Golden Bride’ which he acted in had
achieved an excellent rating of 32.2%. That drama had also received an award in China after it’s DVD release in China this year.
Source: Forex + WithTVXQ
Translation: sshutingg @ OneTVXQ.com
Special thanks: 'jaebabyy @ OneTVXQ.com
Credits: OneTVXQ.com
{ One World. One Red Ocean. One TVXQ! }
Feel free to repost, but please leave the full credits intact.
Thanks!
Shared By:
http://www.tvxqpowerfullgods.blogspot.com/
Posted By:Sayuri JaeJoong♥ 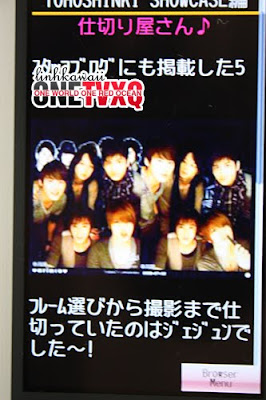 From choosing the frames to the final product,
everything was directed by Jaejoong～! 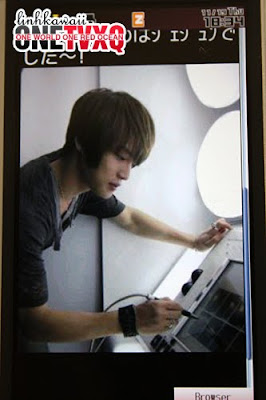 It’s not coming out～～～!!!
In order to get his own original “Keyword” phone strap,
he kept on trying so many times (LOL).
Since it still didn’t come out, he got kind of impatient (*_*) 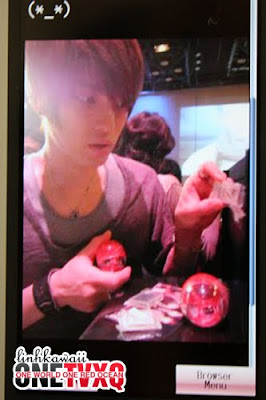 This video is interesting... I love it..
*thumbs up* for the creator...

One of my FrieNd/powerfull reader reQuest..
This is for U... Toki wo TomeTe & Love MeLody in mp3 format...

credits to person that uploaded/owner of the video...
I've used ur video to convert it into mp3... ^.^

Hallo everyone...^.^ Hope that u all will always happy and..
remember to keep in faith with our dong bang...(",)v
And... here are some of Junsu's old videos for u to watch it again..

What HappeN to Junsu?? hihihihi... 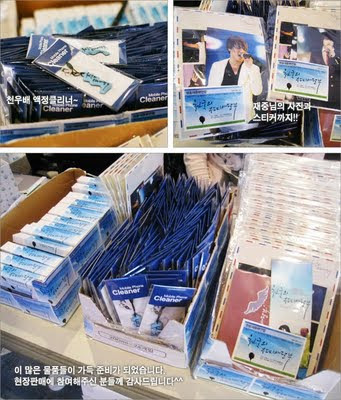 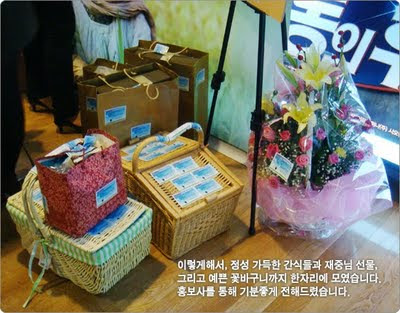 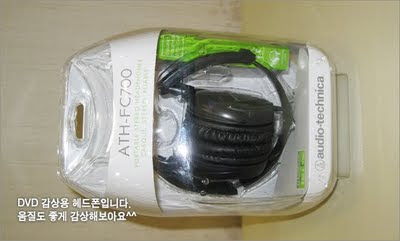 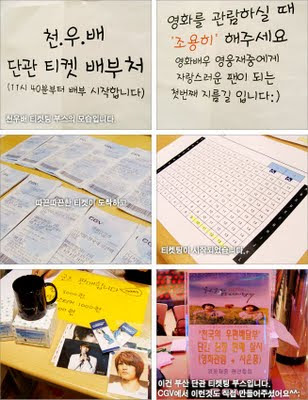 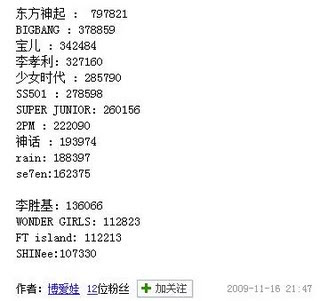 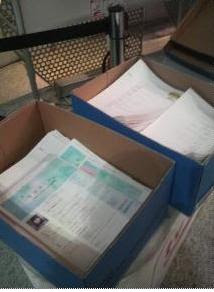 TouJaeTen, Good impressions!!!
T/N “TouJaeTen” is a word made by Eriko.
It is an abbreviation for
Tohoshinki + Jaejoong + Tengoku [heaven].
Eriko was scheduled to meet the director
of a company who has the authority to
decide upon the movie’s release in Japan.
Please refer to
http://www.onetvxq.com/forums/index.php?showtopic=6993
for details.
2009-11-18 18:27:16
Oh, I’m so tired.I am so sorry that my first message
is like this, but it is true.I just came back home.
I received good impressions ❤❤❤❤
I think it is OK!
Good~And I’m tired.
Since I was not feeling well
from the morning,
I would like to make detailed reports
tomorrow or the day after tomorrow.
I will definitely update you,
TouJaeTen followers.
So, please wait awhile.
WOW~~~~~~~ I would like to drink beer.
But I’ve caught a cold, so I drank Kakonaru
(T/N medicine for curing colds)
instead.
Can I tell you the truth?For me, I really made
great efforts to you, for all the fans.20%
of the efforts were for me, and 80%
were for TouJaeTen followers.
Everyone is so serious about this,
it is becoming somewhat frightening.
Actually, I myself had given up
for the release of “Heaven’s Postman”,
and I was up to a mental state that
I have no chances for releasing any of my works
(single dramas, continuous dramas, movies)
in Japan.So I did my best for all of you.
And am completely tired.So, I will go to bed today.
But, I would like to convey my message
that the drama’s release should go on smoothly.Jaejoong’s movie “Heaven’s Postman”
should be released in Japan, the subs made by myself.
For the detailed items,
I would inform you when I wake up from my hibernation.
So, let me go to sleep for the time being.Good night.


These are all your comments that
I’ve printed out.32115 comments,
two cardboard boxes!I have printed them all out,
and brought them to the director.
T/N This article was posted about 14 hours ago.
Up to the time I’ve checked, there are 2700 comments,
all thanking Kitagawa for
her hard works in supporting HP.
Wow~~~
she seems like a guardian for Tohoshiki fans!