I provide u the links...
Im in hurry now.. so sorry again..
A quick post.. and i didnt put any love here i think.. T_T
I wish i have some time to spend my time to watch these fancams..

Even a ticket tout appeared to sell the ticket to women fans of around the age of 20 years old. This is the first musical appearance for Mr. Kim. (*T/N: Korean news editor wrote Mr. Kim here, which is culturally appropriate sir name for the musical or opera performer.)
15 times of his performances (more than 45,000 seats) that Mr. Kim appears are sold out at the end of last year after an interval of
ticket advance sale only in three hours. And the first stage performance was predicted to appear to be the concert place of TVXQ.

The fans hurried up to take the first hand photos of Mr. Kim at the Sejon Cultural Center lobby on this day,
and also every time Mr. Kim finished singing during his musical performance, the fans gave him great cheers.
The fans even raised their voice yelling “AH!” when the scene where Mr. Kim kissed with the co-star, 콘스탄체.
(*T/N: Her name is pronounced “Constanche” here written in Korean. Is she Korean?)

EMK musical production company appointed 35 male guards for an advance sale confirmation and the ticket confirmation for this performance.
Only the fans that brought an advance sale confirmation letter messages were able to enter the lobby area.
EMK set the entrance area restrictions into consideration to secure the security of Mr. Kim and the audiences.
They will take the same step for a performance on the 28th and they will make it public in the near future
to clarify their security majors for the future performances.

Mr. Kim is also appearing in Mozart at Taegu performance, (from February 26 to March 7) for five times,
and the server was downed at the time of the ticket sell on the 13th for the massive interest of the fans to purchase the advance sale ticket.

source Credit: Don-A-Ilbo News
translated by: Junsulv@OneTVXQ.com
shared by: OneTVXQ.com { One World. One Red Ocean. One TVXQ! }
Feel free to repost, but please leave the full credits intact. Thank you!

yes, the co-star is korean. 콘스탄체 is the name of here character. 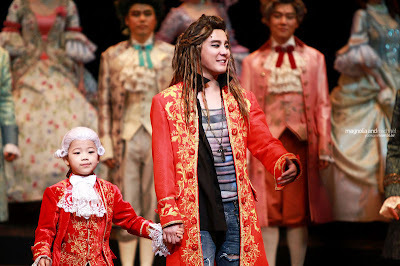 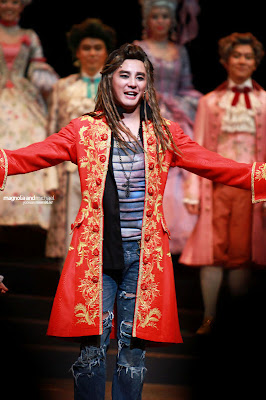 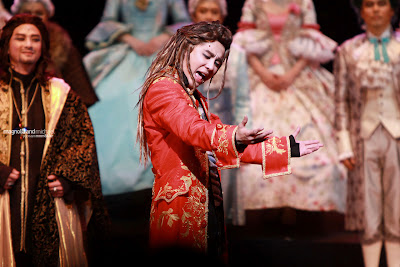 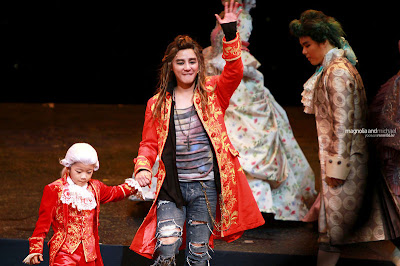 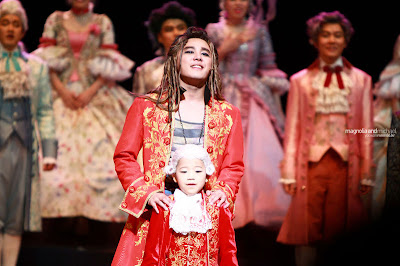 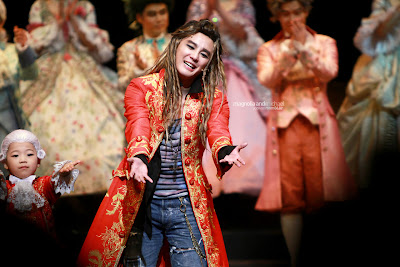 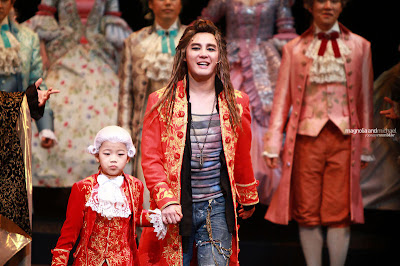 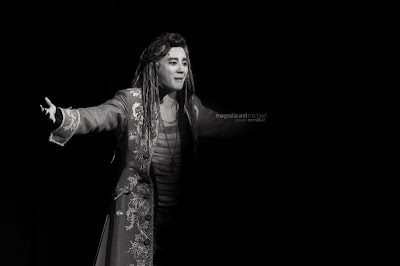 Junsu is genius. A truly gifted singer!! (IMG:style_emoticons/default/laugh.gif)
Simply amazing Junsu! Once again I learned that Junsu can do everything and anything so well!

As soon as Junsu appeared on stage, I was so overwhelmed and I started to cry right away
and I could not see anything. Because of his passion, his powerful voice,
he gave me goose bumps throughout his performance.
He sure is a man who keeps working hard and we surely fall in love with this guy.
I am sure his condition was not perfect due to his recent sickness, yet his performance was superb!

I noticed that when he is not with the other members, he looks taller in person,
and very handsome and attractive. But then, to my surprise, a real kiss scene was there!
Real kiss scean……I cannot even write a comment about it, because I am still in shock.
My dolphin and angel Xiah is now a grown man…..

The other fans at the performance said that, his parents, Junho, Yuchun and Jeajoong were there.
Yuchun was with his mom and his friend. And the fans said that Jeajoong and Yuchun were watching them at the third floor.
(T/N: They could not get VIP ticket??)

Some said that JJ, JS and YC were spotted at the Karaoke place. It must have been to celebrate, Jeajoong’s Birthday together.
And after that they went to Yuchun’s house. I hope they had a great time together.

I am still in shock at this moment of time as I write this report. Junsu’s performance was amazing and that kiss scene….
many more days…..Junsuah~~~

I just saw Junsu’s Mozart performance.
His singing voice gives you goose bumps all over your body.
His kiss scene did not look bad at all to me; it was not that deep scene at all to give me a shock.
I just simply thought “Junsu and she look cute together.”

More than anything, what I thought was that I want as many people as possible to see his performance.
He looks like a fish (T/N Dolphin?) released in the water!
His performance is magnificent and Junsu is truly amazing singer/performer!

source: Bigeast Moe+sakura+as tagged
translated by: Junsulv@OneTVXQ.com
shared by: OneTVXQ.com { One World. One Red Ocean. One TVXQ! }
Feel free to repost, but please leave the full credits intact. Thank you! 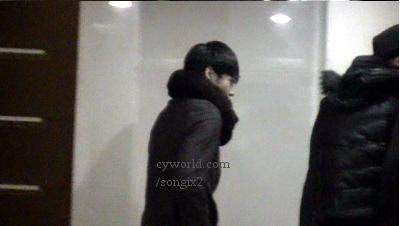 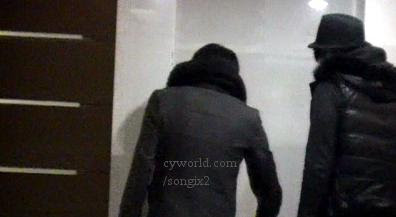 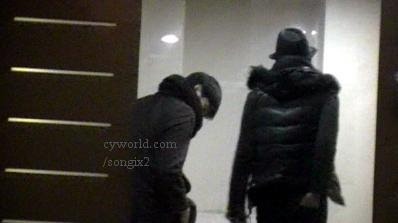 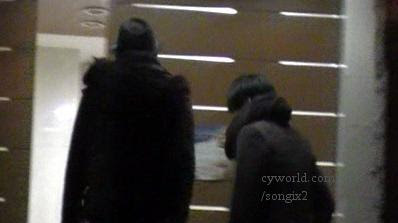 On the 25th, according to a representative of the Gwangju Social Welfare and Fundraising Centre (T/N: name is loosely translated), a person from the fan club called a week earlier to say that they will come down to make a donation of KRW$3,000,000 in the name of U-know Yunho, who was born in Gwangju. The representative said, "To celebrate U-know Yunho's birthday, the members of the fanclub pooled their money together to come up with this sum."

Initially, the members of the fanclub wanted to use the money collected to buy gifts, but recently, Yunho expressed, "For the many people who are suffering, how about donating together instead?", and the fans decided to respond to his view and made the donation instead.

U-know Yunho, who graduated from High School in 2004, visits his alma mater every January, sponsors scholarships, as well as does charity work in the area. Also, Yunho's father recently donated a sum of KRW$5,000,000 under Yunho's name, through a programme run by a local broadcasting station, "Help the Haiti Earthquake Victims", and this caught the eye of many as well. 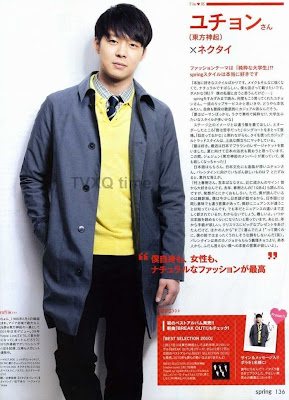 YooChun: There are many types of dressing styles that I like (in the magazine). The model's make-up is light, very natural, and not bad. I would also like to be one of the models in the magazine and get published, can’t I (Laughs)? Feel like it’s really close to what I would wear normally…

YooChun, who was reading the magazine detailedly, not missing a single corner of it, wasn’t joking around. It seems like he meant everything that he said. His usual dressing style is also the casual type (liked he had mentioned).

YooChun: I like wearing beach slippers during the summer, the comfortable and simple college student's style.

As he wanted to wear something different from his performing outfits, he chose to wear a long coat that he bought a long time ago. Initially, he was still worrying whether it will be suitable or not, but after pairing it with a tie, it really suited the YooChun who is casual yet retaining a high class feel.

YooChun: I really like this shirt. Recently I bought a brown leather jacket in Japan, and during summer I would like to buy a bathing suit from Japan too. JaeJoong bought one before and I felt like getting one too!

We asked YooChun, who is well-versed in both Japanese and Japan’s culture, on what he wishes to receive during Valentine’s Day.

YooChun: I would like to get the signatures of Murakami Haruki, Yoshimoto Banana, and Tsuji Hironari (they are famous novelists in Japan). A long time ago, I read ‘1Q84’ by Murakami Haruki, the thoughts are very meaningful, but what I read is a translated version. If only I can get better at my Japanese, then I would be able to understand the meaning of the words on a deeper level, and the beauty of it. However, there are still parts that I’m not able to fully understand in the book, it’s really difficult. Keep having the thoughts of how good it will be when I can fully understand the meaning of the book by reading the Japanese version.

Some people say that Yunho came back from
JeJu Island .I´m not sre about this ok dears?
Anyway you must agree ,this man walking like this
Is like a paradise hahahha Handsomeeeeee♥__♥ 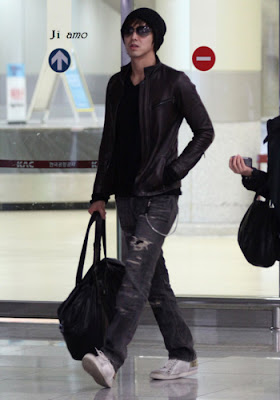 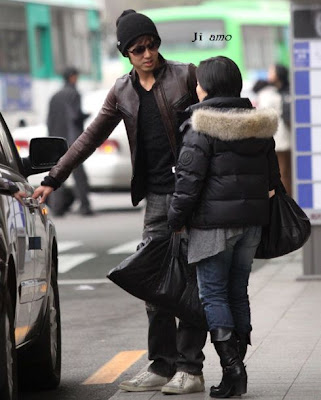 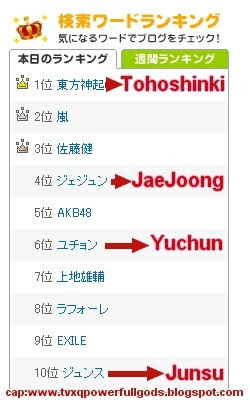 [PHOTO]
•BREAK OUT•
Hi to everybody 1st of all I wanna say I´m back again ...
I was travelling with my sister because of our job
but now i´m in home already ok ?
And Look this such wonderful surprise !!!!
Our BREAK OUT CD Weeee!!!!
I just wanna say one thing :
•I LOVE TO BE A BIGEAST• 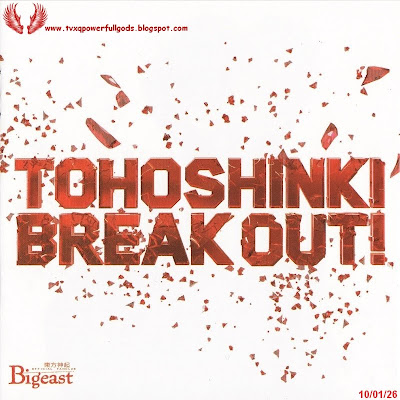 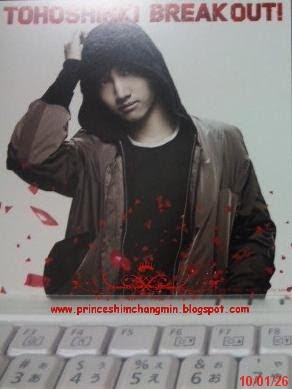 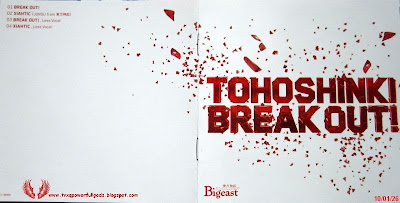 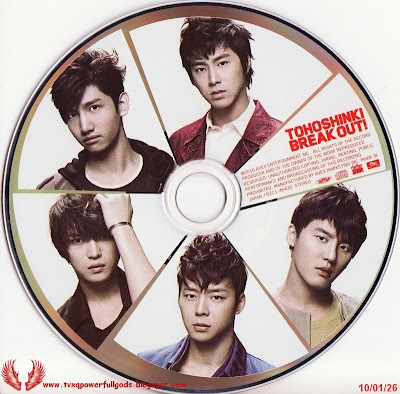 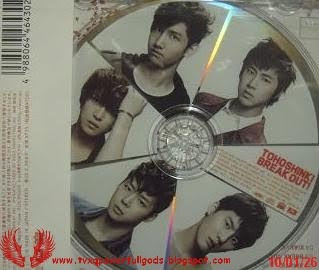 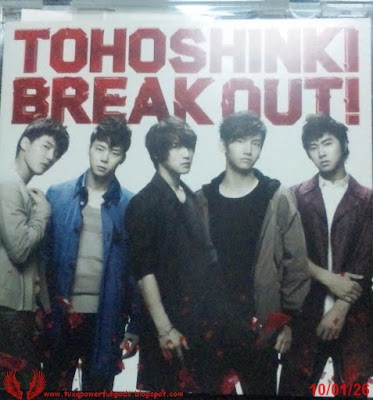